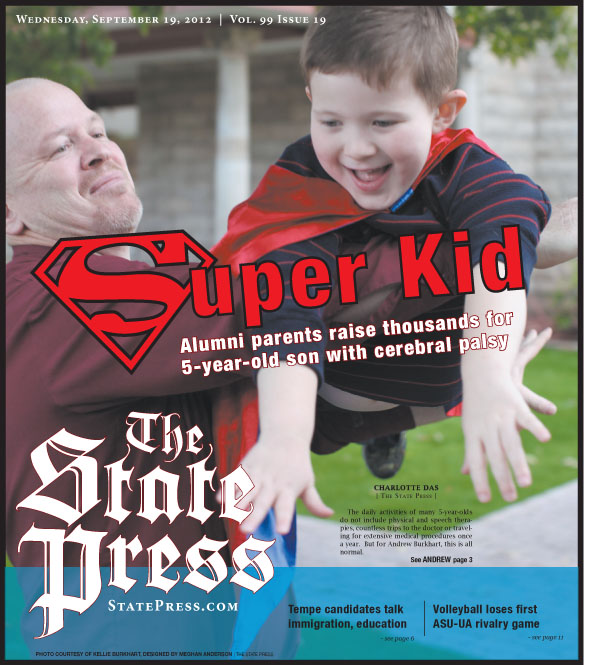 I have an “angel” to share with you who has impacted our lives significantly. Please see news story link below. It is about my now 6-year-old son, Andrew, and part of his journey with cerebral palsy. The “angel” is someone you do NOT see in the story — for she declined to be part of it. She is the stranger who moved out of her home for nearly a month so that we could stay in her home to keep Andrew away from the public while we continued our stay in CA for Andrew to get additional treatments (we live in AZ) after his bone marrow stem cell transplant last year. And…this angel would take NO MONEY for this amazing gift! She just left her home to provide for our needs of somewhere secluded to stay in the area during Andrew’s medical treatment trip last year. We have just returned from a “repeat” of that medical treatment trip — and guess where we stayed for 3 weeks of our time there?! Again, she moved out so we could stay there and would NOT take any money — only difference is that this year, instead of being a complete stranger, she is a very cherished friend!

Here is a link to the news story:
Church Members Help Child Get Expensive Treatment for Cerebral Palsy

The Burkhart family lives in Phoenix, but their child needed treatment in California. Orange County’s Rock Harbor Church made it possible.

Members of the Rock Harbor Church in Mission Viejo weren’t watching when Andrew Burkhart, five years old and wearing a brace on his left leg, scampered out of an Orange County medical clinic and into the parking lot, looking for lizards and snails.

But they were there in spirit.

Andrew had been stuck for an hour in a hyperbaric oxygen chamber getting treatment for cerebral palsy, and now – everyone agreed – he really needed to move around.

Combing the asphalt, he announced in triumph that he had found Speedy, “a very fast lizard.”

In a ritual he had adopted over the past two weeks of stem-cell treatment and time in the oxygen chamber, he set out to find one more snail than he had the day before.

Success of a different sort, his parents hope, will come from the treatment. Doctors at Mission Viejo’s Personalized Regenerative Medicine clinic took stem cells from Andrew’s bone marrow, and injected them into his veins in hopes that the new cells would help his body mend.

Already, parents Drew and Kellie Burkhart say, Andrew’s speech and mobility are improving – more than they did with the traditional speech, occupational and physical therapies the family had tried before.

It’s an achievement that would not have been possible without Rock Harbor Church.

The family’s doctors thought Andrew might be a candidate for stem cell therapy for his cerebral palsy, and recommended Steenblock.

But stem cell therapy is considered experimental for cerebral palsy, so insurance doesn’t cover it. On top of paying cash for the treatment, they would have to come out to California and stay in Orange County for several weeks.

Charitable assistance from organizations like the Ronald McDonald house wouldn’t work because Andrew would need to be away from most members of the public during his treatment.

So Kellie Burkhart sent an e-mail to 20 churches in Orange County, looking for some help with lodging. She said they had some money, but not enough for the several weeks they would need to be in the area.

Bryan Hill is the associate pastor at Rock Harbor Church in Mission Viejo. Hill’s mission, he says, is to “help the person that is right in front of us.”

So when Kellie’s letter was right in front of him, he knew instantly that his congregation could help.

“One of the church members moved out of her home to stay with a friend so we could move into her home,” Kellie Burkhart said, tears in her eyes. The church member isn’t charging the family a dime.

And the kindnesses continued. “The next door neighbor would spend hours cleaning the house getting it ready for us to be here,” Kellie Burkhart said. “The pastor’s wife had taken on collecting donation from the church for gas cards, and grocery cards, and drugstore, all of it.”

There were offers to babysit. Gift cards to restaurants. Stickers and bubbles for Andrew.

Through these acts of kindness, the Rock Harbor Church and the Burkhart’s will always be connected.

The Burkharts were overwhelmed. They went to worship at Rock Harbor – to see the faces of the people that had been so good to them.

Drew Burkhart said he stood up to speak.

“I want to thank you,” he told the congregation, only to be moved again by their response.

“We want to thank you,” people told him. “We are honored to help you out.”

After several weeks of treatment Kellie Burkhart said Andrew’s strength is improving. He is more mobile on his left side, although he still struggles with speech.

Kellie Burkhart, who has been tracking the family’s experience through a blog, weeps when she thinks about all the ways she would like to help other people, and how that help can come in so many forms.

She talks about babysitting for a single mom for two hours, so the woman can take a bath or go grocery shopping.

She wants to sit with an elderly neighbor and just listening.

Drew said they have a spare room at their home in Phoenix, and someday they will return the favor to another person.

This entire experience has strengthened their faith, given them hope and inspiration.

Here is a link to our family’s blog. You will notice if you spend any time reading about our story, we have been blessed with MANY “angels among us” — including our son! Updates are posted in the “Home” section.